The Chingleput Late Madras, District – A manual compiled under the orders of the Madras Government By Charles Stewart Crole of the Madras Civil Service. Published in 1879.

This is a manual of Chengalputtu district, which then extended till Ponneri in the north and Madhurantham in the south excluding Madras city. It covers almost all aspects of the district like geography, revenue system, history, religion etc. Extensive data are given about revenue, population, expense on health and sanitation, expense on education. They are worth comparing with present day expenditure. 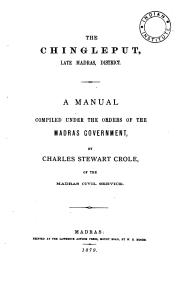 Not much is mentioned in the book about the author. Some details can be gathered from the 1915 book titled ‘The Indian biographical dictionary’ by C. Hayavanda Rao (Page 105). Mr.Charles Stewart Crole served as in-charge of Madras Collector’s office, sub-secretary of the Board of Revenue, Agent Commissioner of Salt Revenue, Agent Collector of Sea Customs. He also served as Sessions Judge, Collector, Magistrate, member of the board of revenue, member of legislative council. According to Mr.Rao Rs.2000/ was awarded for compiling this book.

Some interesting (In my opinion) facts, information and events are

2. Commercial activity in smaller towns along the coast was annihilated by the East India Company/Presidency trade (Ch.1 Pg 11,12)

4. About 88 percent of teachers of village pial schools (திண்ணை பள்ளி) are not Brahmins. (Ch.2 Page 61)

5. St.Thomas’ martyrdom at Little Mount is called as fiction in this book. (Ch.3 Page 74)

6. Three collectors have gifted ornaments to Varadharajaswamy Temple in Kanchipuram.

7. For water supply a channel was constructed which as about 3 miles in length in 1792 by Sittakoni Rao who was in services of Nizam. Part of this channel is underground supplying water to various tanks. The British government have urged the municipality to revive and extend this supply channel. (Ch.3 Page 117)

The book can be downloaded from Google Books  here